Making Our Way Out of Climate Change 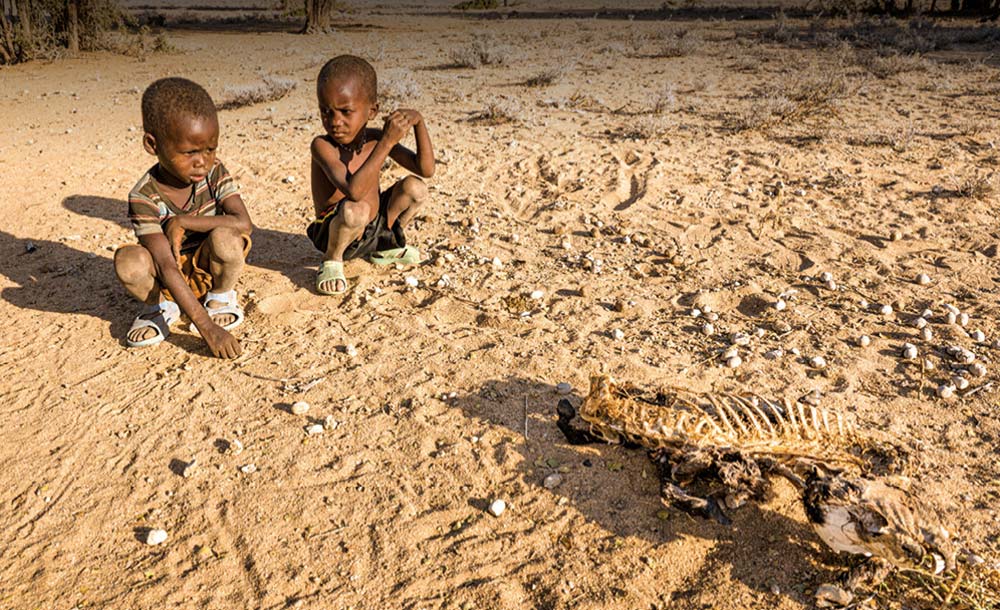 Two boys in Kenya sit next to the remains of a goat. Turkana, where their home is, is experiencing a prolonged drought which kills both pastures and livestock.

Two boys in Kenya sit next to the remains of a goat. Turkana, where their home is, is experiencing a prolonged drought which kills both pastures and livestock.
Tags：

Making Our Way Out of Climate Change

As residents of this world, we are all in some ways subject to the changes of seasons and natural disasters. Sadly, climate change has become increasingly serious in recent decades, and the impacts of subsequent extreme weather events have been putting more people in danger. At the start of this year, the southern Africa region was hit by a series of cyclones over two months, while in East Africa, rainfall has been below average in four consecutive wet seasons, resulting in drought. Elsewhere, parts of India and Pakistan were devastated by an extreme heatwave, which was followed by experienced extensive flooding. Water levels in some places got so high that some houses built by the poor along the shores were flooded and destroyed.

At the recent 27th Conference of the Parties of the United Nations Framework Convention on Climate Change (COP27), Dina Saleh, the Regional Director of the UN International Fund for Agricultural Development (IFAD), pointed out that there could be dangerous consequences if the world fails to help rural populations adapt to climate change. It is going to lead to longer poverty, migrations and conflict. She also warned that crop yields could reduce by as much as 50 per cent by the end of the century. Undeniably, there is no way that we can stay out of the challenges of climate change anymore, and it could well be our next generation who would be paying the price.

For many of us, climate change may only mean that temperatures and typhoons are not quite like what they have been before. However, according to the United Nations Framework Convention on Climate Change, climate change is essentially “a change of climate, which is attributed directly or indirectly to human activity that alters the composition of the global atmosphere, and it is in addition to natural climate variability observed over comparable time periods”. In order words, every one of us is responsible for climate change!

Climate change does not only concern our health and the environment of our community, but also international and regional matters that may lead to conflict. With the Intergovernmental Panel on Climate Change (IPCC) being a recipient of the Nobel Peace Prize in 2007, it is evident that the relation between climate change and peace has long been identified and recognised. However, after all these years, many countries have yet to fulfil their promises regarding climate change. 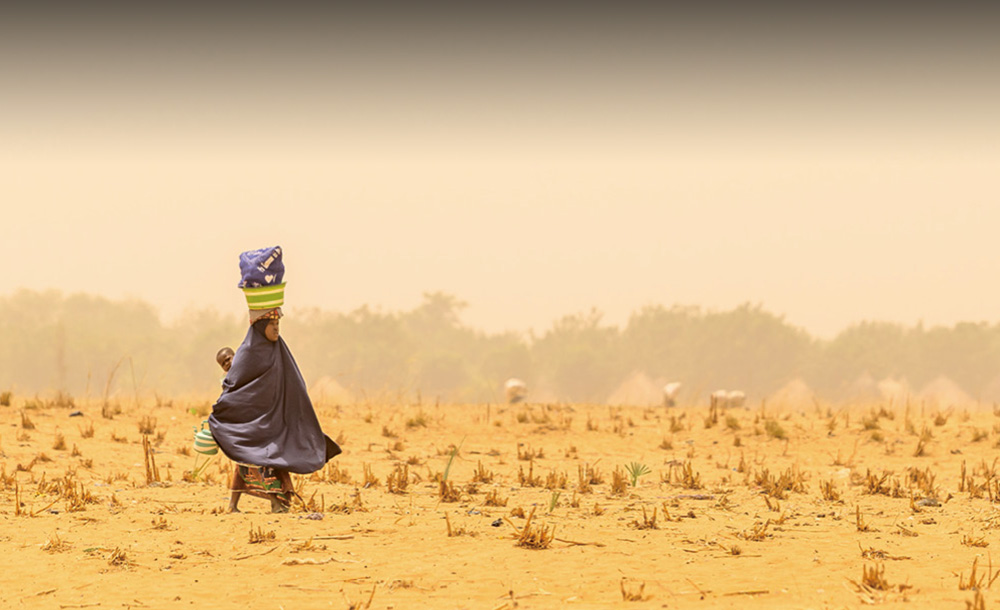 A woman in Niger carries her baby across barren land.

A woman in Niger carries her baby across barren land.
According to the World Health Organisation, between 2030 and 2050, climate change is expected to cause approximately 250,000 additional deaths per year from malnutrition, malaria, diarrhoea and heat stress. It is also estimated that the direct damage costs to health (excluding costs in health-determining sectors such as agriculture and water and sanitation) by 2030 will be as high as US$ 2 to 4 billion per year.

The lack of resources means that the poor, who may have little knowledge on environmental protection, often have to inadvertently or reluctantly use their limited resources to meet immediate needs, and leave irrecoverable damage on the environment and sustainable development. On the other hand, the rich is also misusing a lot of resources to satisfy their thirst for wooden and paper products, which is producing greater carbon emission than the poor. This further highlights the reality of uneven distribution of resources, and provokes us to reflect on who the real culprits of climate change are: the poor mass that has long been ignored, or the few privileged ones who are wasting instead of sharing the resources of our world?

No matter who should be held responsible, it is undeniable that the ones that suffer most are vulnerable children and families who have long been affected by poverty, conflict and climate change. 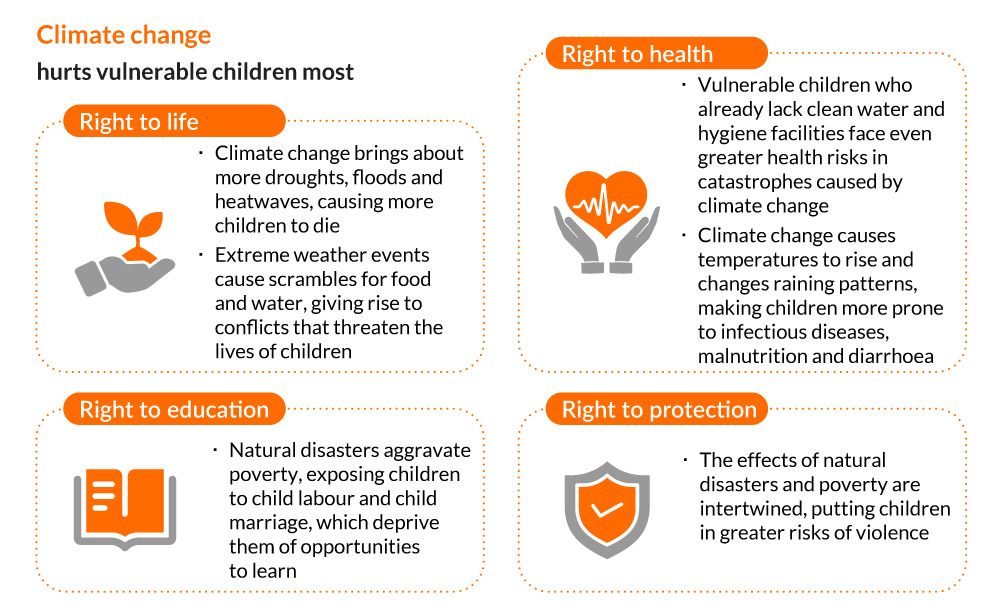 Host to the fifth largest refugee population in Africa, Kenya has been experiencing several consecutive failed rainy seasons, leading to drought in multiple places and devastating the livelihoods of agricultural and pastoralist families.

Joyce, a farmer in her early 50s, lives with her husband, Edward, and four-year old granddaughter in Kenya’s Elgeyo Marakwet County, having relocated to the area in 2014. “We moved here after discovering that there were fruit trees that could do well in this area compared to Kitale, where we used to live before,” she says.

Since their interest was in farming, the family cleared all the vegetation including beneficial shrubs on their two-acre plot of land that was majorly filled with an invasive weed. What was left behind was bare, degraded land with deep gullies. “At the time, we didn’t know that we were causing more damage. Also, I later came to realise that we were residing in an area affected by lightning and strong winds that frequently swept away our roofs.”

Elgeyo Marakwet County is among the Arid and Semi-Arid (ASAL) areas in Kenya, where the livelihoods of communities are threatened due to land degradation and the impacts of climate change that cause drought, flash floods and landslides in the area.

World Vision, through the Central Rift Farmer Managed Natural Regeneration Scale-Up Project (CRIFSUP), has been building resilience of communities to these climate-induced disasters through initiatives that boost their food security and improve their livelihoods. The focus has been on a low-cost reforestation technique known as the Farmer Managed Natural Regeneration (FMNR) that is helping communities to restore degraded lands and solve some of the key environmental challenges they are facing. Joyce is among the 629 lead farmers that were trained on the FMNR approach by World Vision. She then cascaded the knowledge to her husband. Thereafter, they joined hands and began implementing the FMNR approach on their farm land. Six years down the line, there is absolute joy on Joyce’s face as she talks about the approach.

“FMNR has truly changed our lives. Our attitude towards taking care of the environment has changed because we know and have experienced the benefits of having trees in this homestead. Our roofs are no longer carried away by strong winds. The trees act as wind breakers,” she says.

Joyce, who occasionally prunes the trees in their farmland, says that the trees provide sufficient firewood for cooking all year round. Previously she would walk for at least 14 kilometres to and fro, in search of firewood. This was time consuming and she always got home tired while not having enough time to spend with her family. Apart from firewood, she now enjoys more benefits that come with the indigenous acacia trees such as increased soil fertility that has subsequently increased her crop yields. 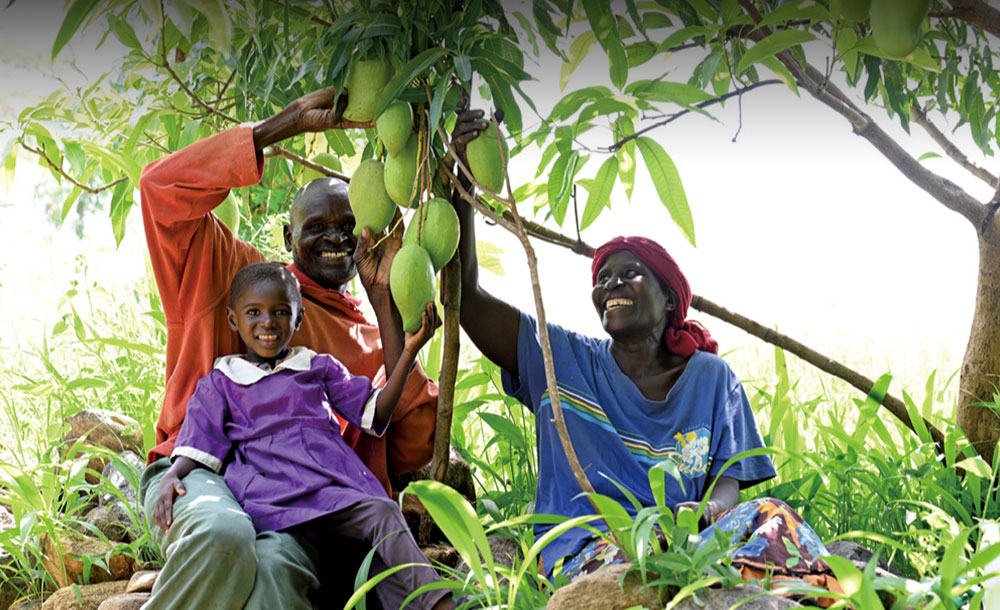 “FMNR has truly changed our lives. Our attitude towards taking care of the environment has changed because we know and have experienced the benefits of having trees in this homestead,” says Joyce (right). 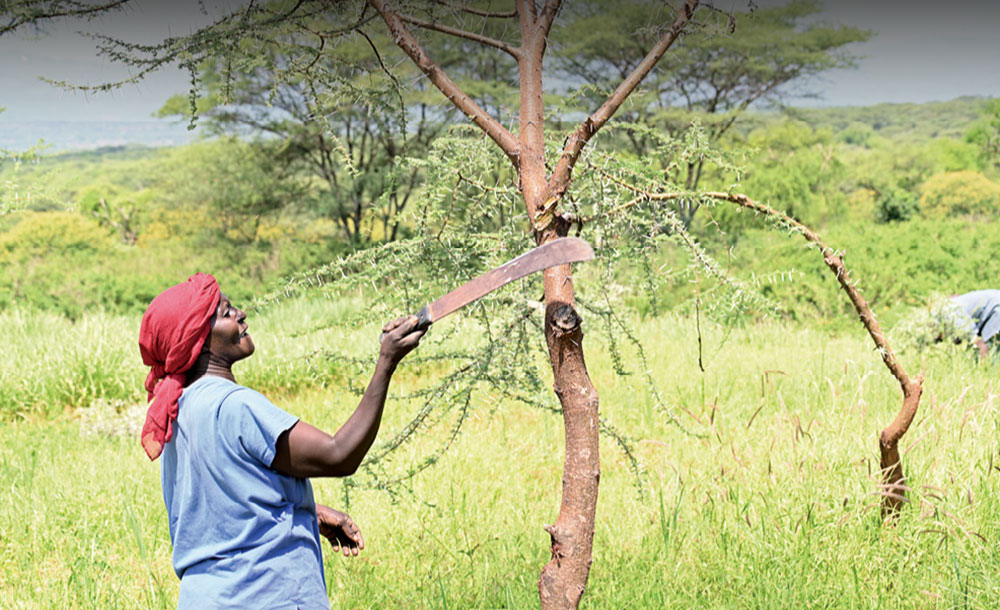 Joyce prunes the trees and collects the pruned branches as firewood.

“FMNR has truly changed our lives. Our attitude towards taking care of the environment has changed because we know and have experienced the benefits of having trees in this homestead,” says Joyce (right).

Joyce prunes the trees and collects the pruned branches as firewood.

Joyce grows a variety of drought-tolerant crops such as beans, groundnuts, sorghum, green grams and traditional vegetables, among others. These healthy nutritious crops are both for the family’s consumption and for sale, which boosts their household income. Additionally, their farmland produces high yields of fodder and pasture that is enough for their livestock and for sale.

This year, many counties in Kenya experienced prolonged drought, including Joyce’s. When many were suffering, with increased livestock deaths and food shortage, Joyce’s family was well prepared. She had stored surplus hay for her livestock in preparation for the dry season. “For over four months, we were affected by drought. It was so severe that even if you had money, you couldn’t get vegetables at the market. However, the case was different in my home, thanks to FMNR,” Joyce says. The family had planted drought resistant crops such as the black night shade, chaya and pigeon peas that they could eat during the tough times.

Joyce boasts of her family’s good health thanks to having a balanced diet. They have mature pawpaw and mango trees and have now started growing passion fruits and oranges.

“At first, I doubted whether the tiny shrubs would turn into anything beneficial even with the pruning and management as we had been taught. But look, now we have enough to feed ourselves, our livestock and to sell for income. Had it not been for the training I received on the FMNR approach, none of this would be happening. Thank you, World Vision,” says Joyce. 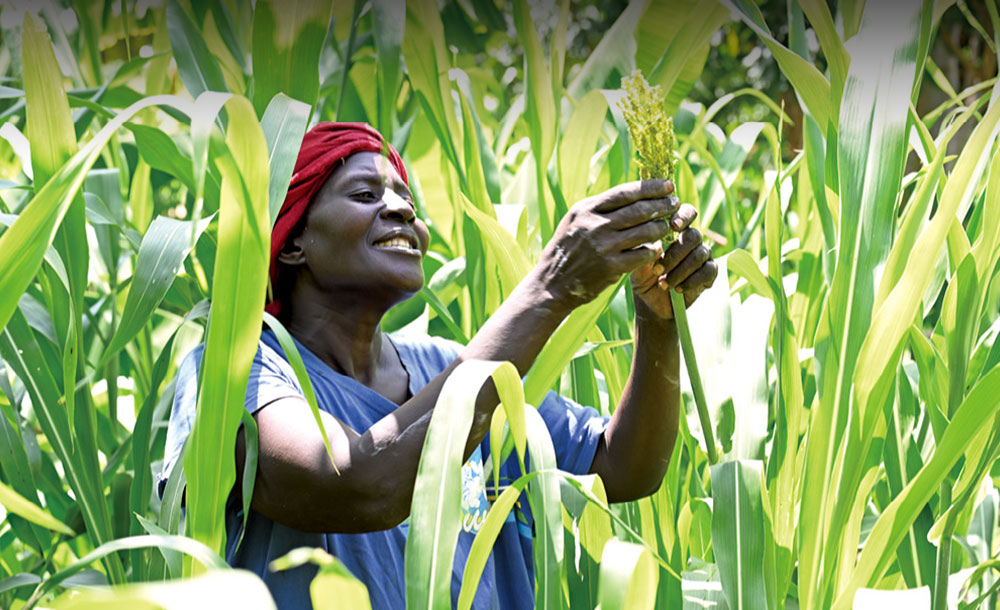 Joyce grows sorghum and a variety of nutritious crops. Soil fertility and crop yields have greatly increased since she adopted FMNR. 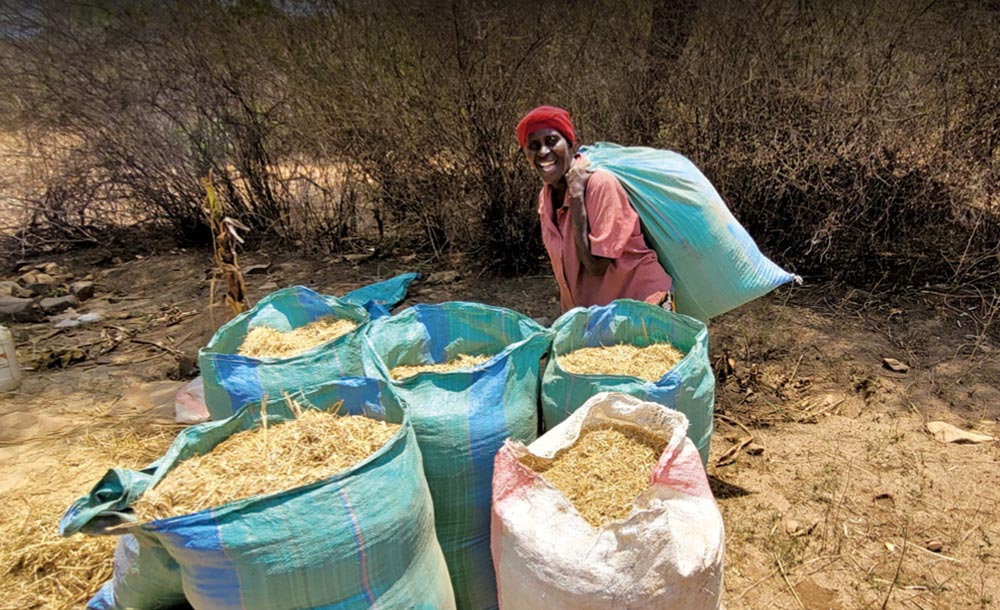 Joyce dries, grinds and stores extra fodder for her animals ahead of the dry season.

Joyce grows sorghum and a variety of nutritious crops. Soil fertility and crop yields have greatly increased since she adopted FMNR.

Joyce dries, grinds and stores extra fodder for her animals ahead of the dry season.

FMNR was developed by Tony Rinaudo, Principal Natural Resources Advisor for World Vision, in 1983. It is a low-cost and sustainable land restoration technique that is effective in strengthening farmers’ resilience against extreme weather events. Besides the technique, World Vision also teaches farmers to plant drought-tolerant crops and adopt sustainable land management methods. Even in the face of fierce waves of climate change, we believe that as long as we are all committed to caring for the world that God has created, it is still possible to keep the environment sustainable and revert the effects of climate change, allowing future generations to enjoy sunlight, clean air and all the food cultivated from the land. 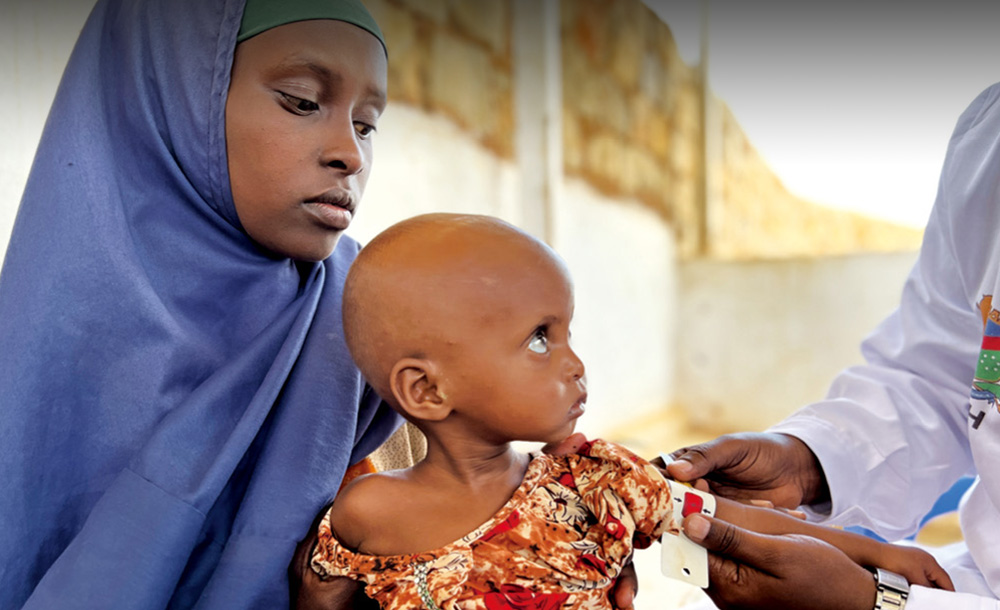 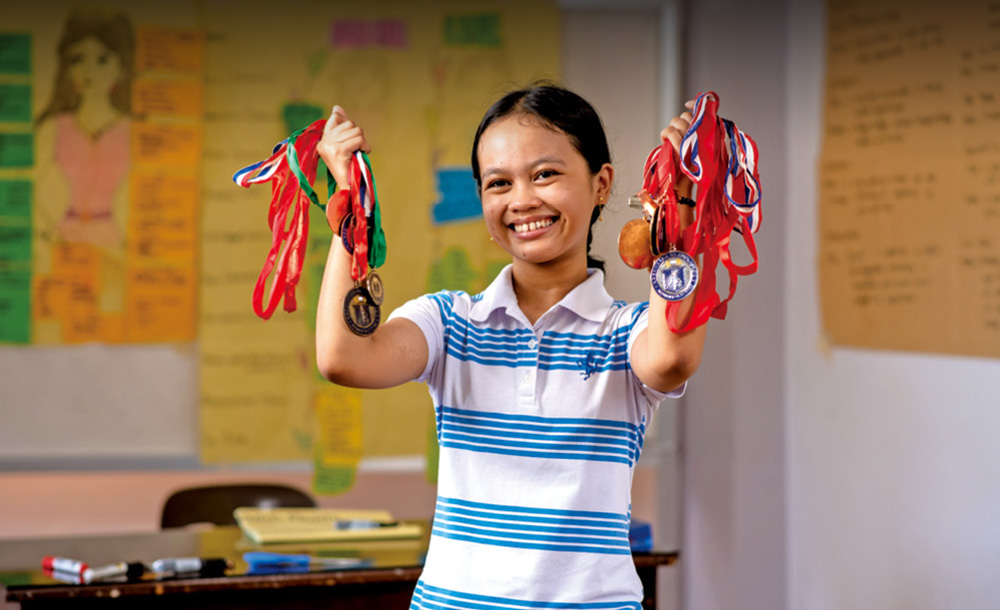 16-year-old Alyza is the epitome of a model student and daughter. 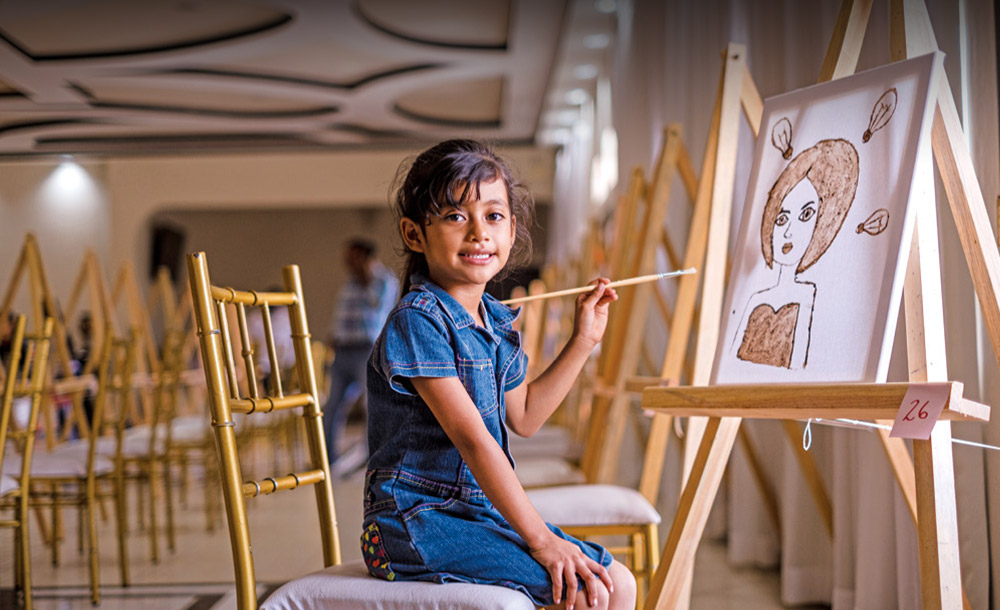 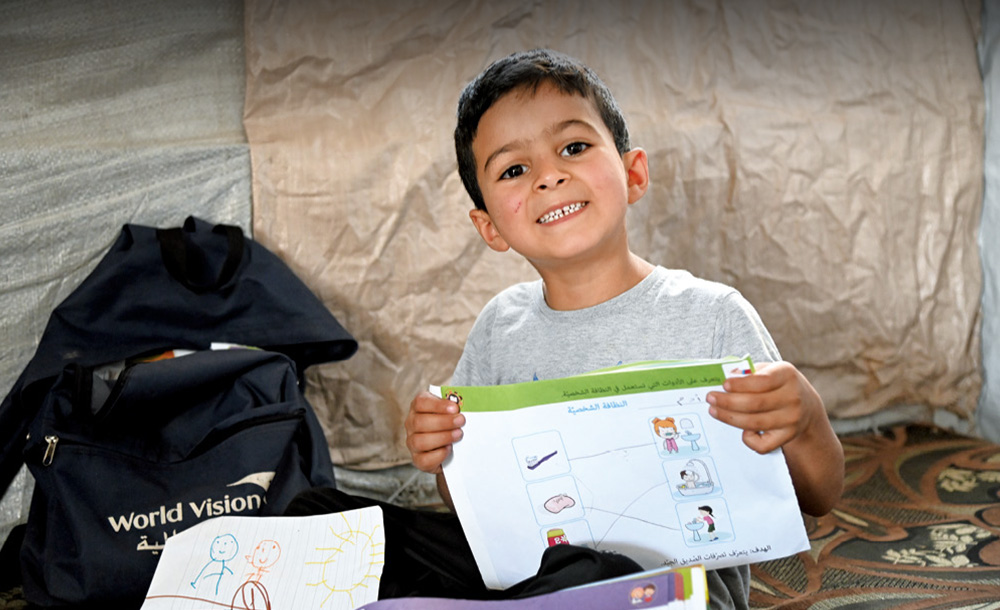 For a Brighter Future

Access to education represents a powerful weapon that will help children be at the forefront of the fight for a fairer and be...... 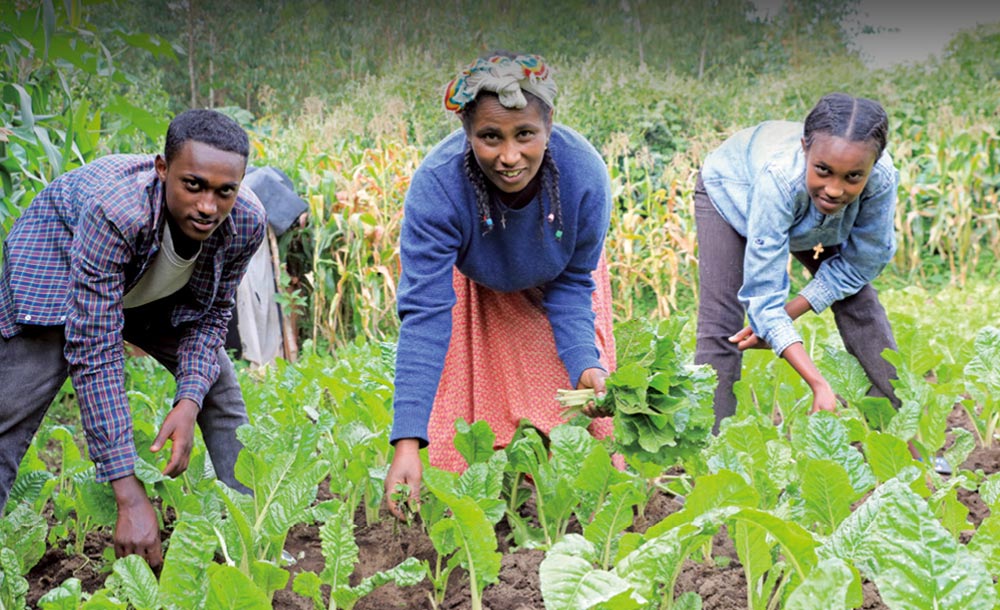 In 2021, World Vision Hong Kong contributed about HK$32.8 million to support 6 APs and 2 other projects in Ethiopia.

16-year-old Alyza is the epitome of a model student and daughter.

For a Brighter Future

Access to education represents a powerful weapon that will help children be at the forefront of the fight for a fairer and be......

In 2021, World Vision Hong Kong contributed about HK$32.8 million to support 6 APs and 2 other projects in Ethiopia.